Success Story: "This is a really ‚SMART‘ system!“ 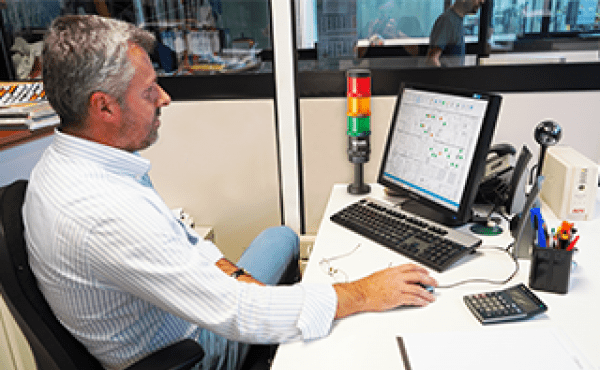 In order to reduce unplanned machine downtime to a minimum, improve response time to down time and to free up latent machine capacity BETA Utensili has installed a low cost and retrofittable machine monitoring and data collection system at its plant in Lodi in Italy. Signal towers indicate machine status and transmit this information wirelessly to a PC workstation where it gives a completely transparent overview of the operation. The easy to install wireless monitoring system provides the tool manufacturer with the required data to enable complete analysis and optimisation of the production process.

BETA Utensili is Italy’s leading manufacturer of a comprehensive portfolio of professional working tools and instruments – from pliers to screwdrivers, hammers, cutting tools and instruments for measurement and test, even down to personal protective wear equipment. The Tool specialist’s catalogue covers 30 categories and contains over 14,000 products. The three manufacturing locations of the company in Milan, Castiglione d’Addi (Lodi) and Sulmona (L’Aquila) produce over 10 million parts per annum which are sold worldwide.

"Downtime costs a lot of money“

Davide Negroni is one of 600 staff employed at the company which has subsidiaries in Europe, Asia and South America. He manages production at the site at Castiglione d’Adda close to Lodi where over 70 staff work 24 hours per day over two or three shifts.  “I am responsible for the complete production process” says Negroni “and we make several million tools per year, half of which are sold in Italy, the other half being sold on the international markets.”

Davide Negroni stresses how important, given such high volumes, “that production runs problem free and that any stoppages are responded to immediately.”  He adds; “an undetected stoppage, even if it is only five minutes long, causes considerable increased costs which of course we would like to avoid.  In addition to which the company is constantly striving to review the processes continually, to analyse and optimise them.” Negroni concludes: “only by doing this can we increase productivity and maintain our competitive edge.”

The search for the right solution

“In the past we had a constant battle with machine downtime which went either unnoticed or were uncovered far too late” says Negroni: “in addition to which I could never see the productivity of our machines in real time which therefore also affected the response time, so we had to find a solution.”

Through a Google search the 50 year old Production Manager found the monitoring and machine data collection system SmartMonitor from WERMA. “I had tried out several other systems and just about given up hope of finding a simple uncomplicated system which fulfilled our needs and which would also be easy to install and low-cost.” The enquiry was sent in to WERMA and resulted in an initial consultation by telephone and just a few days later Negroni received a trial kit for three machines.

“I was immediately won over!”

SmartMONITOR consists of wireless transmitters, a wireless receiver and the software. The tried and tested robust system transmits data on 868 MHz and the networked transmitters roam continuously looking for the optimum route to send data back to the receiver. A wireless transmitter unit is simply added to an existing WERMA signal tower and monitors constantly status changes of the machine, equipment or manual work-station and, if selected, the count of the output.  Status changes are transmitted wirelessly to the receiver unit and saved to a SQL database which is an integral part of the software supplied.

Signal tower acts as the interface

WERMA’s SmartMONITOR offers manufacturing businesses a smart alternative to monitoring machines and work-stations and collecting data in an uncomplicated and simple way.  The intelligent networking of signal towers provides the basis for a cost-effective, simple and retrofittable alternative to more complex traditional monitoring systems. Type of machine or age is not important as the WERMA signal tower serves as the interface for the system.

At the Castiglione d’Adda site of BETA machine tools, presses and other special machines which are all networked on the SmartMONITOR system. Negroni explains further; “our production facility is very extensive which many different types of machines deployed, some of which are out of line of sight.  This system offers the best possibility to see machine stoppages and error statuses immediately enabling speedy responses to be undertaken. During night shift when there is no supervisor on duty I can be informed of machine status change by e-mail and can see immediately if the machine is operating correctly.  This enables the response time to issues to be minimised and avoids lengthy stoppages occurring.”

Once the initial test phase was completed Davide Negroni ordered more units from WERMA. “We have now installed SmartMONITOR on more than 40 machines” advises Negroni proudly. Dr. Vismara who runs the BETA site in Milan has also installed the WERMA system. “We use SmartMONITOR at our site to check the performance of the facility and analyse downtime and the causes of unplanned stoppages. It is simply fantastic how quickly we can check and control and how the efficiency of our plant has improved thanks to the WERMA system.”

Evaluation at the touch of a button

The installation and introduction of the WERMA system at BETA passed off without a problem. “The system really was quick and easy to install and be ready for service” says Negroni, “and we had the first meaningful figures within the first week – you really can’t get it quicker than that!”. The software displays the networked system of monitored machines and in the Control Station or Cockpit view the user can see the real time status of machines, analyse productivity, look for error/stoppage sources and thereafter improve the efficiency of the machines.

Responding to a question about how staff have reacted to the system Negroni answers; “our staff are also pleased with the system as it is now immediately clear where there are problems and stoppages and how quickly these can be responded to. It shows clearly repetitive issues which can then be addressed with long term improvement measures.

BETA is very happy with the WERMA system and already planning to expand the use of it.  “We are very pleased with the product and with the service from WERMA” concludes Negroni. “We will install the system on the rest of the machines in use already and then on future purchases.”