For the Yamauchi Corp. N.V., SmartMONITOR from WERMA is an essential element on the path to digitalisation 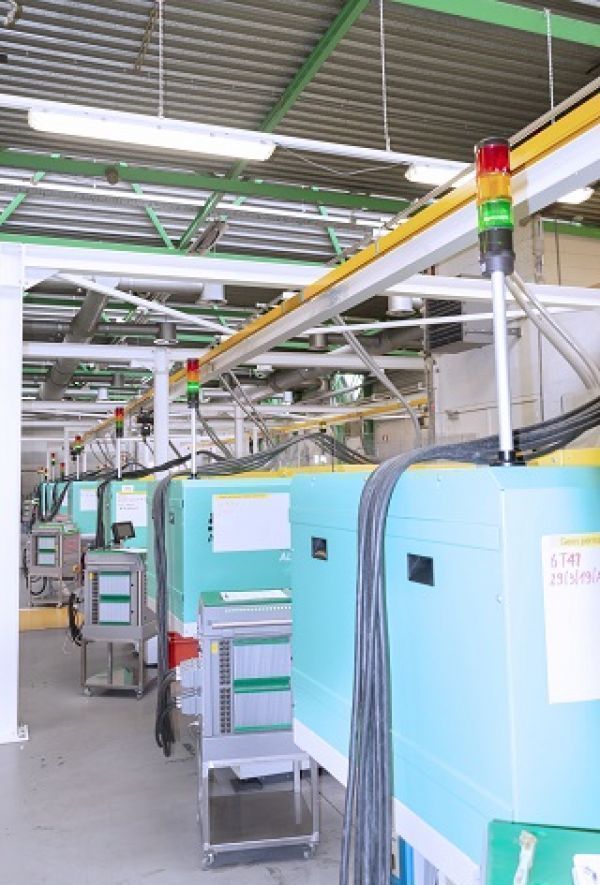 Each machine already had a WERMA signal tower, which was quickly and easily kitted out with a SmartMONITOR module

The Yamauchi technology company in Hasselt, Belgium, has set itself the goal of continually optimising its own production process and of eliminating downtimes by focusing on Industry 4.0 concepts. Too often in the past, the company has been faced with machine downtime and disruption without knowing the exact cause. Looking for a solution the company came across the intelligent, wireless tretrofittable SmartMONITOR system from WERMA. As an alternative to conventional machine data logging systems, SmartMONITOR provides information  in real time about the frequency and causes of downtime, thereby providing the basis for further investigation of the root causes of downtime and possible optimisation solutions.

Full transparency of the manufacturing operation

The Yamauchi Corp. N.V. (Belgium) is a subsidiary of the Japanese Yamauchi Corporation. The joint-stock company, based in Hasselt, Belgium, specialises in the production of plastic injection moulded parts, including those for the automotive and battery industries.

The location in Hasselt (Belgium) produces more than 1 billion plastic components a year. To ensure the highest quality standards, continuous process optimisation is essential for the company. In order to ensure that  high customer expectations can be met in the future, the company aims to be fully fit for Industry 4.0 by 2020. "We have 50 injection moulding machines spread over two workshops. All of the machines in these two shops are controlled by just three people,” says Rudi Vermeulen, Yamauchi Plant Manager in Hasselt. The company faced two major issues when problems arose.

The distance between the first and last machine is around 100 metres, and a solid wall divides the two shops. This often led to machine error and down time remaining unnoticed and unresolved for long periods of time. That's why Yamauchi was looking for a simple yet retrofittable machine monitoring system that not only reliably displays machine downtime but also logs the status condition data on a central control station and database.

With SmartMONITOR, all the relevant data froml machines and manual workstations can be viewed with a simple click of the mouse. SmartMONITOR from WERMA consists of wireless transmitters retrofitted to the existing signal tower which transmit status change data of the machines or stations wirelessly to a receiver plugged into the client LAN network. The Having collected the data it is then stored on a database within the software from where it can be displayed on client PCs in a variety of displays and charts enabling further analysis of the causes of downtime and disruptions and thus enabling process optimisation counter measures to be identified and implemented.

At the Belgian Yamauchi plant, WERMA signal towers have already been providing information about the current status of the respective machine for many years. The company heard about the easy-to-retrofit machine monitoring system SmartMONITOR through a trade magazine, and plant manager, Rudi Vermeulen, was immediately enthusiastic about it. The contact with WERMA already existed, and, soon afterwards, Kurt De Pauw, Technical Account Manager at WERMA, was able to  provide a demo set for an initial trial.

"After installing the demo set, it quickly became clear where one of the problems of many downtimes lay: in the raw material!" says Vermeulen. There were more than 96 alarm messages during the 21-hour test phase. On the basis of the SmartMONITOR evaluation, it could be reliably determined that these error messages were being triggered in connection with a new batch of production material. The first problem could therefore be localised and promptly resolved after only a few hours. As a result, all the 50 injection moulding machines at Yamauchi were equipped with a Performance-Slave wireless transmitter.

Thanks to the supplied software, Yamauchi can view the current state of the machines at any time on client PCs. Networked signal towers that visually and audibly alert the responsible member of staff to a disruption to production have also been installed in the canteen and in the outdoor area, where there are no client PCs to view the machine status. In this application a status change on a machine triggers another signal tower in the canteen or external area to be illuminated thus showing that a status change has occurred and requires intervention. This meant that the reaction time could be reduced leading to a reduction of 20% in machine downtime.

"Another alternative would have been an extensive machine data logging system from the respective machine manufacturer. The cost of acquiring such complex systems would have been many times higher, however, and their integration would be much more time-consuming,” says Vermeulen. For Yamauchi, the simple and fast integration of the wireless SmartMONITOR System was a significant advantage. SmartMONITOR has paid for itself after only a short time, and has proved to be the right decision.

"We are also carrying out piece counting with the system now. This allows us to forecast the completion of orders, and thereby better prepare the set-up times, or we can also monitor target/actual comparisons during order processing. From now on, we will also be equipping all new machines with signal towers and the WERMA SmartMONITOR right from the start. This will further optimise our production and enable us to serve our customers even better!“ says Rudi Vermeulen with a smile.