Optical and audible signals, warn, protect and guide us. They are deployed where caution, care and far sightedness are required and are understood throughout the world, independent of language and written culture. Such signals are especially important in explosion hazardous areas where they are deployed to indicate extreme dangers to people, machines and buildings. 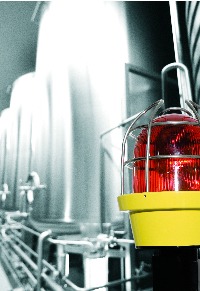 Explosive
In order for an explosion to occur three elements must be present:
1. An inflammable substance at a dangerous concentration - in the form of gas or dust.
2. Oxygen in sufficient concentration, generally from the surrounding air.
3. An ignition source to initiate the explosion (e.g. an electric spark, hot surfaces).

Where devices designed for a normal industrial environment must meet a variety of different standards, explosion protected devices must meet a set of additional requirements for the Ex area. Only on this basis can they be operated safely. Safe means that despite the presence of an explosion hazardous atmosphere the devices do not represent a danger, i.e. they do not generate an ignition source.
The regulations for the manufacture of these explosion protected devices are defined in the European directive 94/9/EU – generally known as the „ATEX directive”.
All devices and protective systems for the Ex area deployed within the EU must be approved in accordance with this directive.

Common European standard
The ATEX directive 94/9/EU unites the statutory provisions governing devices and protective systems for deployment in explosion hazardous areas for the whole of the EU. It is the first comprehensive European directive for explosion protection and is designed in the first instance to remove trade barriers.
ATEX accreditations are now recognised by a large number of countries outside Europe too.

Explosion hazards in the different industry branches
The danger of explosion doesn’t just occur in recognisable explosion hazardous areas such as oil production facilities, refineries or gas supply facilities. Explosive situations can also occur in many “normal” working environments where there is ample inflammable material.
In wood processing industries as well as the food and animal feed industries gas and dust is produced that can be brought to explosion causing major catastrophes.
A tragic example is the flour dust explosion that occurred in 1997 in a grain silo in Blaye / France: 11 people were killed and the silos, along with the adjacent administrative building, were destroyed. The explosion occurred during the unloading of maize meal in a silo.

The most violent flour dust explosion in Germany occurred in 1979 when sparks from welding work ignited a silo belonging to the Roland mill in Bremen taking the lives of 14 people and causing total damage to property of 50 million Euros (2).

The pharmaceutical and chemical industries as well as the disposal and recycling sectors also harbour a variety of potential hazards. The metal industry with its milling dust is also rated as an explosion hazardous area.

For these reasons it is important to be able to correctly asses the preconditions for an explosion in order to prevent it completely or, at the least, to reduce its effects.

This classification also makes economic sense. Devices for the zones 0 and 20 need to be especially safe – which makes them correspondingly intricate and cost-intensive – whereas lower safety standards are sufficient for the zones 2 and 22.

Temperature classes / ignition temperature
The ignition temperature of gases, vapours and dusts are values specific to each material and have been determined in a set procedure conducted according to IEC 60079-4.
This has enabled the materials to be classified according to temperature classes ranging from class T1 to T6. These classes indicate the highest surface temperature which the device must not exceed, even in the event of a fault, and the explosive substances in the environment it can be employed in without danger of ignition.
In the case of dust the manufacturer indicates the maximum surface temperature in °C. The user can then select the appropriate device for the type of dust present in the respective environment.

Explosion groups
Gases, vapours and dusts are also classified according to their flammability. Here the values are also specific to each substance.
The classification is conducted according to IEC 60079-11 into the groups IIA, IIB, and IIC. Group IIA represents the lowest and group IIC the highest degree of flammability.

Zone classification, ignition temperature and flammability of gases, vapours and dusts are parameters that have been established in practice.
A manufacturer of Ex protected devices is now faced with the task of developing and launching products on the basis of these known parameters and in accordance with the existing standards. The types of protection will only be dealt with in this article in as far as they provide the device manufacturer with a range of protection principles for establishing the required Ex protection. He is free to choose the form of protection employed as long as the final product doesn’t constitute a source of ignition and thus can be safely employed in explosion hazardous areas.

Developing such products generally begins with in-house research and development. The result is then examined by an EU accredited test centre e.g. PTB, EXAM or KEMA. Theoretical considerations are supplemented with practical explosion tests.
Following a positive conclusion to the inspections the test centre issues an EU type test certificate. This is required for the sale of the explosion protected equipment.

In conclusion it should be noted that within the EU every manufacturer of explosion protected products must have passed an Ex audit conducted by an accredited test centre in addition to meeting the general QA standards.
This ensures that manufacturers of Ex products have the necessary special knowledge and apply this in-house.

WERMA Signaltechnik has been developing and manufacturing innovative optical and audible signal devices of the highest standard for over 50 years. WERMA also has a comprehensive range of signal devices with ATEX approval for use in Ex areas.