20% more productivity thanks to SmartMONITOR

Specialist manufacturer of electromechanical drive systems
Drive systems made by Ketterer can be found in most industrial sectors, from general industry to service and trade. The innovative drive systems are used to adjust the height of desks and workstations and are also deployed widely in access/entry systems, warehousing and logistics and the machine industry. The family owned SME, steeped in traditional values is well-known as a “problem solver” with a range of standard solutions as well as customised variants available to the customer. 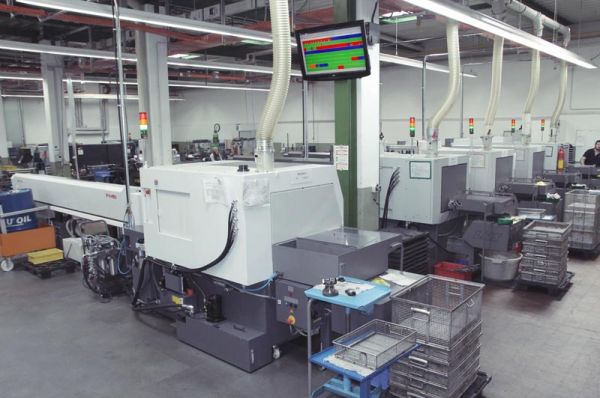 A large screen has been installed in each production area so that the status of each machine can be easily seen.

Julian Markon has been with Ketterer for just four years. The Production Manger describes the strengths of the company: “we supply drive systems into so many segments that I would be surprised if not everybody had come into contact with our products at least once. We are especially proud of our customised solutions especially if challenged to find a solution for an existing application.

Complete transparency of the workshop
At the moment approximately 200 staff are employed at the Furtwangen site and the company is proud to have remained loyal to its traditional Black Forest roots. Markon is also the Lean Manager at Ketterer and stresses how important it is for the company “to question, analyse and optimise processes”.

With a production area covering 4,400 sq. m Markon looks after 145 members of staff and a substantial number of production machines including 5 rolling machines, 17 gear cutters 15 CNC lathes four milling machines and 104 assembly cells. The components for the shafts, drives and motors are manufactured in 2 and 3 shift operations.

Classic traffic lights for signalisation
In order to safeguard the process it is paramount that the machine operator can see the status of each machine and for this reason Ketterer uses WERMA signal towers and andon lights on each machine. These show immediately status changes of the machine and indicate disruptions to productions and allow the status of a line to be viewed from some distance.

Ketterer uses the classic traffic light configuration of red, amber (or clear) and green as these are most readily understood. Red of course indicates an error or disruption to production which needs to be resolved immediately. Amber or clear means that the tools are being re-set and is purely informative and green of course means that the machine is running normally.

Problem: physical location of all of the machines
The machines are located in several workshops and different buildings. The signal towers show the status of the machines locally but do not allow any centralised overview. The Production Manager wanted to gain transparency of the complete production operation by seeing the status of all machines in one view.

The company then went about researching and looking at several machine data monitoring systems but most were judged to be too expensive or complex and involved considerable installation costs. Then, by coincidence, one of the buyers, Mrs Neubauer, attended an event at WERMA and discovered how WERMA’s wireless machine monitoring system SmartMONITOR was being used in their own production and thought that this might be just the solution for Ketterer.

Simple and effective low-cost system
Very soon afterwards WERMA’s Christoph Müller from Technical Sales had SmartMONITOR installed on some of Ketterer’s machines. Markon is now responsible for the WERMA system and is very pleased with the many benefits of the system: “it was great to be able to get a trail up and running so quickly and to test a machine monitoring system live in our production. In this way we could validate with our eyes and ears how the system actually works.”

The plug and play wireless kit is simply added to the existing WERMA signal tower and then monitors the status and output of machines, equipment and manual work-stations. The status data is transmitted wirelessly to a receiver connected to a Microsoft SQL database and is output to simple visuals provided by WERMA’s software which will also produce comprehensive reports at the touch of a button.

The low investment cost was important to Markon. “We did not want to invest too much in one go because we did not know if we would see the long-term benefits. The possibility to start with a trial on some of the CNCs was great and this became our pilot project but then when we saw the fantastic results with SmartMONITOR on these machines we began to roll the system out successively onto other machines.”

Simple software provides comprehensive analyses
Installation of the system at Ketterer was completed without any problems. Markon continues “the system really is simple, quick to install and ready for use – we installed it on machines in the morning and had the first data in the afternoon, that’s what I call quick”. The software is easy to install on the company network and comes with step by step easy to follow instructions. Those connected signal towers are displayed on a central Control Station view on the PC and clients can analyse productivity, look at fault codes and then determine ways to optimise and improve the efficiency of the machines.

Markon concedes that the most important data which SmartMONITOR generates is that giving the productive status of the CNC lathes. “This shows us how productive these machines are and where improvements are needed.” The company takes full advantage of the displays which the software provides. In the Production Manager’s office the Control Station view is used whilst near the machines themselves the current run-time of orders is displayed. Markon has uploaded as a background to the displays a factory floor layout so it is easy to identify which of the machines is being displayed and where they are located.

Complete transparency of the operation
So that everyone can see the status of all machines four large screens have been installed. In each of the production areas a screen shows the status of those machines in that area. Markon continues: “the departmental managers and I use the screens most of all and we can see as soon as we walk into that shop which machines are down and need attention.”
But he remarks the machine operators also use the screens as well to monitor their own activity and help colleagues to react if there is a problem on one of their machines which they might not have immediately seen. “In the past a machine going down often remained unnoticed for far too long. Now the team supports each other and works to the common goal of improving reaction times and reducing downtime.”

Immediate tangible results and improvements
Ketterer has been using the WERMA system now for over one year and productivity on the CNC lathes has already improved by more than 15%. “Productivity improved almost immediately from 60% to 80% and we hardly believed that such an improvement could be achieved so quickly” says Markon. He is especially impressed with the results achieved after just a few weeks which delighted the Production Director and Managing Director. “SmartMONITOR offers the perfect cost benefit solution. The system gives accurate and impartial data which we can really use. We are very pleased that we decided not to go for a more expensive and complex solution” concludes Markon.

Ketterer is very happy with the WERMA solution and will certainly extend its application. “We are indeed very satisfied with it” confirms Markon. Four more signal light sets including the SmartMONITOR kit have been ordered for the gear cutting machines. Markon says finally “the next order for more WERMA kit is ready to be placed; I think that tells you how happy we are with the WERMA solution.”